Live review: Artists try to cope with the loss of Amy Farris — and honor her — in a tribute concert 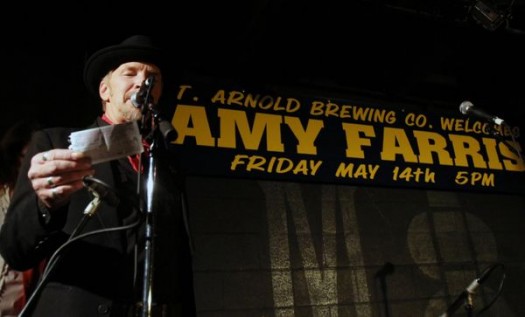 Dave Alvin hosts the event in remembrance of the late singer-violinist, who died in September at age 40.

“When we lose a member of our tribe, we don’t mourn, we celebrate, and we make a lot of racket,” Dave Alvin said at the outset of a 3½-hour tribute to the late violinist, singer and songwriter Amy Farris Sunday night at McCabe’s in Santa Monica.

The event, which Alvin hosted, featured some of the most revered members of the L.A. roots music scene including veteran singer-songwriters Peter Case, Stan Ridgway, Rick Shea and the trio I See Hawks in L.A.

The musicians played on a stage outfitted with a piano bench adorned with candles, flowers and photos of the Texas-born Farris, who died at Sept. 29 at the age of 40. The Los Angeles County Coroner’s office is still awaiting toxicology results from an autopsy to determine the cause of death, but it is being investigated as a possible suicide

Each set reflected the various ways of coping with grief. I See Hawks leaned on songs Farris often performed with them when she joined them at their local gigs. The band began with Bob Dylan’s “She Belongs to Me,” with its layered expression of affection for the kind of artist who “can take the dark out of the nighttime / And paint the daytime black.”

The group brought both levity and poignancy to their choice of one of Farris’ own songs, a honky-tonk weeper called “Pretty Dresses” about a heartbroken woman hoping that if she wears the right dress, her former lover will return to her. They often played it together, singer Rob Waller said. “She would do a verse then I’d do a verse, and sometimes we’d do it even when she wasn’t with us. That was our little secret.”

Ridgway turned to a couple of songs he’d written in recent days, inspired to an extent by feelings Farris’ death had sparked and what came across as a wish to understand what leads some people to desperation. “Through the sunshine and the rain / I gave it everything / Where others tried to walk/I always tried to run.”

Upstairs after the show, Ridgway addressed the complexity of the evening’s emotions. “What do you do? Everything seemed inappropriate . . . She was dealing with a major illness, and sometimes people do things in a desperate attempt to get some kind of control. It’s just sad.”

Case seemed to yield to exploring the moment, following a year with losses of several musician friends. “It’s kind of rough up here,” he said before also offering eloquent compositions emphasizing the spiritual dimensions of life and death rather than personal anecdotes about Farris.

Alvin brought Shea out for his set, starting with “Downey Girl,” a song that carries with it the idea that assessing the full measure of a life sometimes takes years. Noting that none of the previous performers had included anything addressing Farris’ pride in her Texas heritage and her role as the only women ever to play in country crooner Ray Price’s band, Alvin turned the microphone over to Shea to sing Price’s aching hit “Faded Love.”

The title song from Alvin’s 2004 album “Ashgrove” addressed the futility of the desire to return to imagined happier days gone by, at the same time recognizing the role that a deep yearning for another time and place can play in life: “We all need something just to get us through.”

Alvin, who had produced Farris’ only solo album, also had performed at another memorial event held three weeks ago in her hometown of Austin; there, he was accompanied by his band, the Guilty Women, of which Farris had been a member, in addition to Texas singer songwriter Kelly Willis and X founding member Exene Cervenka.

Alvin mentioned during Sunday’s show that proceeds from donations collected from the two tribute concerts are going to Hungry for Music, a nonprofit group that supplies instruments to underprivileged children. (Two young violin students Farris had taught, 8-year-old Aeden Gasser-Brennan, and his 4-year-old brother Jonathan, opened the event with a short recital.)

Alvin ended the show on an upbeat note, choosing an all-hands-on-deck finale of Wanda Jackson’s rockabilly rave-up “Let’s Have a Party,” each singer grabbing one verse. “When Amy did her own shows,” Alvin explained, “she always ended with this song.”

A more spirited send-off would be hard to imagine.