Morning in Swindon. Paul L rises, woken by the reliable cell phone alarm, realizes he’s in a dank room over a British pub, stumbles downstairs with his guitar and clothes bag, and the reliable taxi shows up, taking him to the Swindon train station. A very British train station, reliable and comfortable, with espressos, pastries, cheery baristas, and magazines in the early morning.

The train ride is a quiet caffeinated delight, through beautiful flat English farmland towards London, then a switch at Reading. Charm evaporates from the landscape, lots of modern suburbs as we pull into Gatwick airport on the outer ring of the London megalopolis. A train to the airport–this is a peak of civilization. From anywhere in England you can board a train, drink tea, read the paper, and arrive at the airport, a short walk to arrivals. Los Angeles missed out on this. Too bad.

Gatwick was in low key disarray, organized British disarray for the theater of multiple passenger checks brought on by the alleged UK airline terror plot. Paul L’s personal crackpot theory is that this latest wave of inconvenience will convince the public to agree to biometric ID and perhaps ID chip implants, linked to your personal record kept in a central databank and available only to the good people who want to keep you safe. Like Alberto Gonzales and Michael Chertoff. (Great Britain is way ahead of us in the march to totalitarianism. The CCTV cameras and their accompanying plaques are everywhere. Pumping gas into your car is a bit chilling for the old school civil libertarian. A sign at the petrol station informs you that the fuel will flow after the surveillance camera has scanned your license plate and cleared it with a central security database. And sure enough, after about 10 mysterious seconds, the petrol flows.)
But enough Orwellian breast beating. In fact totalitarianism may be necessary to control unprecedentedly dense urban populations in mega-cities. Don’t like it? Move to the country.
The lonely country.

Like Ireland. Loneliness can be found here. A tense plane flight to Cork, rent a car, reunion with the wife in touristy harbor village Kinsale, then a winding all day drive on narrow roads along the south Irish coast, past many small villages, ancient cemeteries, sheep on the stone wall-divided hillsides. A peaceful and beautiful land. In Bantry, on Bantry Bay, of course, a small town with a long history–like everywhere else on this small island with the epic story–Paul L and Victoria buy organic veggies, smoked fish and rice for their week’s stay. The next drive takes them along the south coast of the Beara Peninsula, one of many fingers of land jutting westward into the Atlantic. The more famous peninsulae are Kerry and Dingle to the north.

Beara is a bit neglected by the motoring tourists, and that’s a good thing. Sweet isolation on a tiny twisting road. Mist enshrouded gray slate ridges, ancient seabed, climb at wild angles to their unseen cloud covered summits. These would be called hills in the great geology of the American west, but their stature is immense, and foreboding. Wild mountain goats with ZZ Top length beards watch the passing cars, perched on rocks by the highway. We cut north nine miles across the backbone of Beara, west of the forbidding mountains, and arrive in Ardgroom village, 20 multicolor old buildings huddled back to back in lonely fields on a bay. We meet the laconic Mr. Shea, who owns the town gas station/grocery/bakery/internet cafe, and the farmhouse he’s renting us. He hops into his car, leads us up a gravel lane to the foot of a mountain. His family’s 200 year old stone house, renovated to modern convenience, is the only building for a mile around, and commands the plateau beneath the mountain, a vast commons of green where 52 local sheep owners, including our Mr. Shea, let their sheep graze, under the eye of a pink faced old shepherd who serenades the morning with commands to his sheep dog leading flock up the green slopes.

It’s nearing sunset, but the Irish summer day lasts forever. We dump our stuff in the house and walk downhill across fields to a stone circle we can see from the kitchen window. Our feet are wet from the boggy grass. The sun sets behind the mini-Stonehenge, its jagged tall stones forming a distinct circle in the farmer’s field. Pilgrims have left small offerings on a small table stone in the middle of the circle, many copper Euros and pence, a bracelet, shells. We leave a black mushroom found in a cowpie. It’s probably psychedelic, and Paul wants to eat it, but Victoria forbids him. On toxicological grounds.

Ireland is a giant blackberry patch. We never found a lane or fence or stone wall not covered with thorned branches laden with fat ripe berries. We made blackberry jam, stored it in a Guiness pint glass in the fridge. We walked many miles on the Beara way, through abandoned stone Famine houses, small lakes, endless dramatic vistas. We took a rowboat onto a lake, preceeded by fearless upper crust British blond ten year olds, and figured out how to get out of a strong current that stopped us dead in the middle of the lake. Paul L got up his nerve in a pub and sat in with a trad Irish group on his new bodhran, seemed to get away with it. 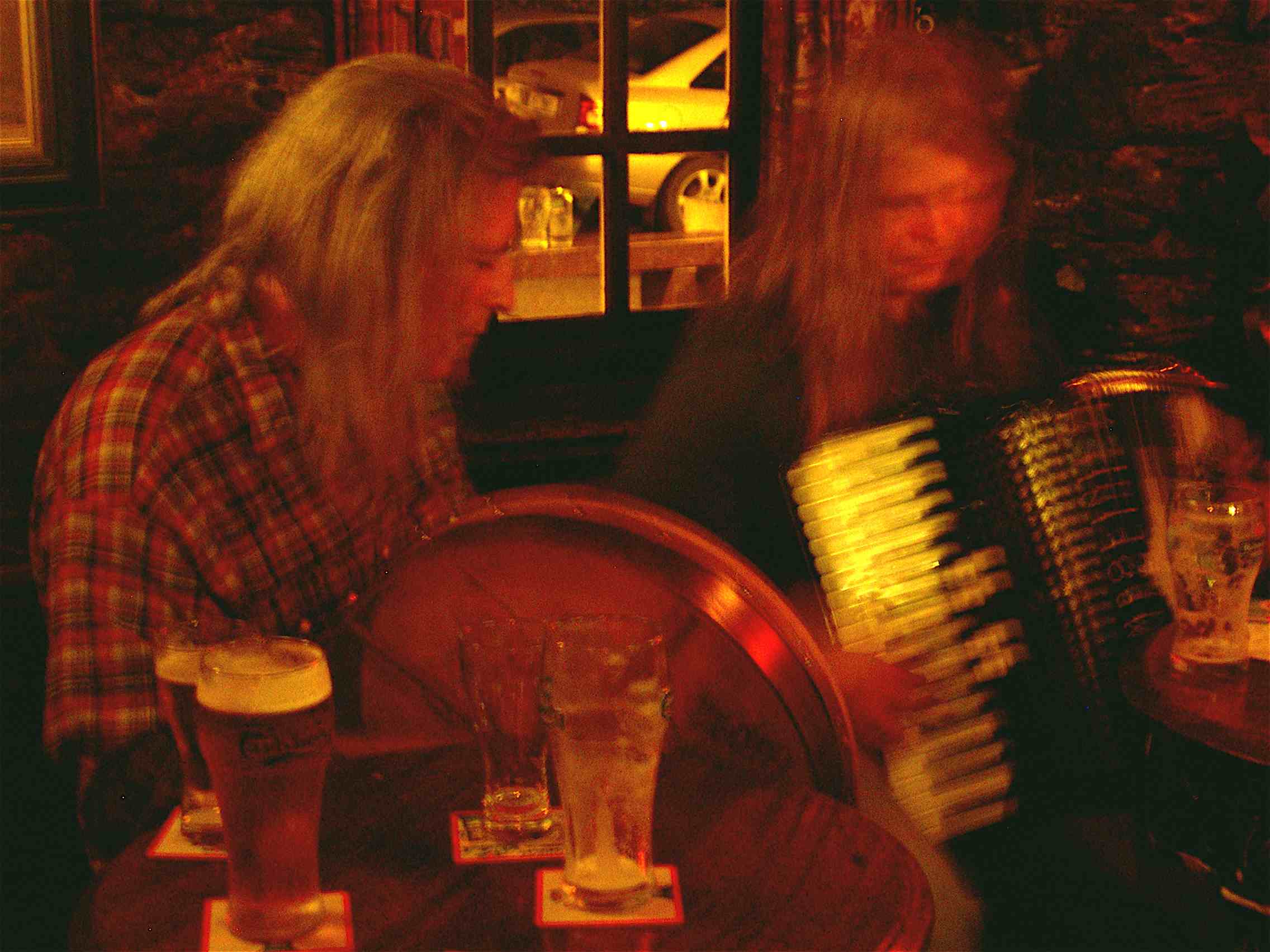 Three times we found ourselves in breathtaking sunset moments, the second being a high mountain lake reflecting orange light under the black mountain slopes and cobalt to purple sky.

The third time was a transport to pre-Celtic times: a stone circle on a dramatic plateau overlooking a lake. To the left the fiery sunset cast the jagged circle into silhouette; to the right, an ancient oak and birch forest, somehow untouched by the harvest rape of Ireland’s forests in the 17th and 18th centuries, stretched along a steep hillside, its interior in twilight mist that surely sheltered fairies, sprites, and banshees.The narrow road at night is a forlorn link between the tiny villages. The car headlights disperse only for a second the lonely spirits of countless generations and tribes. They rush in behind us. This is a sad and haunted land.

In Eyeries village 5 miles away we drink Guinesses and Jamesons with a young Irish writer/adventurer, who covered the rave and concert scene for a Belfast paper and now works as a boat builder, working with his cousin on their own boat in the off hours, which they are going to sail around the world. A singer/guitarist sets up his PA and plows through a set of American country music standards, accompanied by cheesy mini-disc recordings. Locals stream in continuously, and suddenly the place is packed, and the dance floor is filled. We and a few other tourists leaven the pure Irish locals mix. We hit the dance floor for a waltz, realize there’s a long circle through the two rooms of the pub, get into the flow after a series of collisions with bemused locals. Next, four couples, including a tough old matron who glares at any misstep, take the cleared floor for a series of polkas and reels, and we’re treated to old fashioned Irish social dancing, a combination of rudimentary square dance type patterns with complex step dancing footwork, rather dazzling. Next, a beer chugging chunky lad with Down’s syndrome, wheelchair bound in a bright Cork Gaelic Football jersey (they just lost to Kerry) is wheeled around the floor by his aunt. The youth rocks out, swinging his arms gracefully in a self-styled dance, and his family swarms the floor, circling the wheelchair as the patrons clap and cheer.

On one of the last days Paul climbed the mountain-hill behind the farmhouse, drenching his feet within the first five minutes of the venture. This was a tricky climb, as grass and stones were soaked from the morning mist. Many encounters with sheep gazing the upper ridges, and the valley and bay below disappeared beneath the mountain mist. The summit was a long narrow rib covered in a thick red grass, and the mist hid the view of the mountains across the deep valley that surely lurked down the unseen slope.Lovely. Just lovely.

Next post: DRIVING AROUND IN L.A. IN A SUBURBAN