From Topanga To The Sea

Paul L and Victoria went on their usual Tuesday hike in Topanga Canyon, and it was dry, dry, dry. 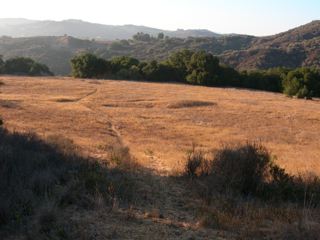 All the grass is completely brown, and the trail has an inch of powder dust in the low spots. 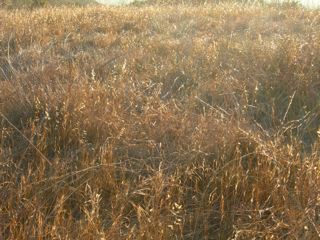 The plants still thriving are the tough chapparal shrubs. 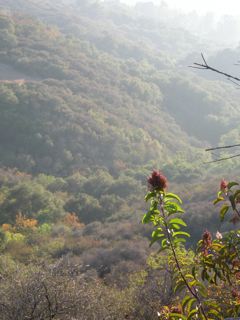 Some of the shrubs are more like trees. The western slopes of L.A. County haven’t had a major fire in an unusually long time. The Topanga air vibrates with unresolved tension. New grass from the odd July rain has already flourished and died. 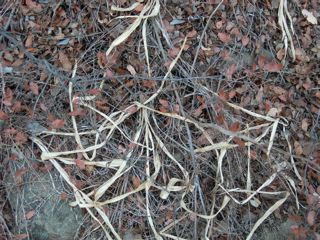 As we walked east on the trail out of the ranger’s headquarters, we passed a down and out couple moving their possessions through the dust, sad little pastel urban backpacks on plastic wheels, clothing bags, and an outdoor gas stove in its battered shipping box. They were dragging their stuff in shifts along the trail to a picnic area a mile away, where a similarly hardbitten sister or aunt was changing a baby’s diaper on a picnic table. I guess that’s their new home. Tom Joad has returned. It’s better than Sixth and San Julian. 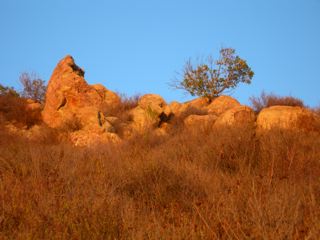 We reached the ridge as a golden light filtered through smog or perhaps smoke from the Santa Barbara fire. In L.A. the sun seems to set in the north, because the Santa Monica Bay faces southward to a false west. A town of illusion. We were sweaty and parched, and chugged the rest of our water. 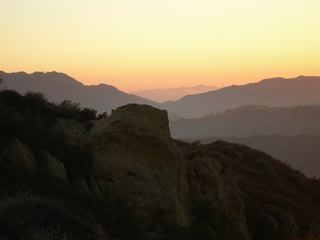 From the ridge a wide fire road dips back towards the canyon and thick oak stands, with a grand view of the Bay (ignore the greedy Palisades Highlands McMansion cluster that should never have been built). As twilight fell, a dense cloud blanket over the Santa Monica Bay crept up the canyons towards us, glowing. 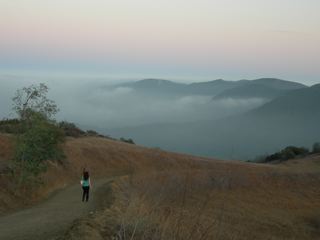 The fire road dropped steeply into the fog bank, which we felt first, a drop of 15 degrees, sweet relief. Then we were in the mist, a fast moving ghost that filled Topanga in minutes. 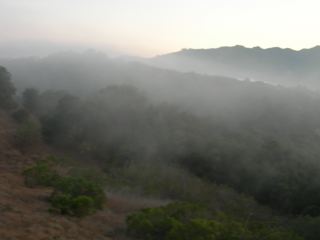 If you are in the oaks at twilight, you are almost sure to see owls, and tonight a huge one dropped onto the dirt road 50 feet in front of us, hard to see in the tricky light. We walked towards him, and he took off for the tree branches above, picking a branch too small, flapping his huge wings to balance, now sharply silhouetted. We stood and gawked for a long while, hooting, pleased when he turned his head towards us with a distinctly annoyed attitude. At last Mr. Owl flapped off the high branch, swooped over an oak and roused a companion. The two disappeared into the last light.