The bright orange celestial flame that starts out in Santa Monica so clear and defining of Southern California becomes  a dull rust glaring off the mix of smog and sooty bumpers by the time you get to San Bernardino.  While the lucky few stroll with the kids and dog through the manicured streets of Pali, the vast majority of Angelenos are commuting to the weekend.  Escape means a liquor soaked Saturday night at the craps table in Sin City or 2 1/2 days with the family in an overpriced Lake rental last remodeled in 1982, wondering what happened to the dream.  If the Eagles in their Hotel California heyday represented the picture everyone believed, I See Hawks In L.A document the reality of the 99%, set to a soundtrack of weeping guitars and three part harmonies.

Their seventh album, Mystery Drug, follows a theme they’re adept at producing.  It’s a mix of reality TV stories culled from their own lives and elevated love songs imbued with a thread of melancholy.  In the former category the winner on this record is no doubt We Could All Be In Laughlin Tonight.  If you ever wanted to know the story of how a musician pays his dues, here it is in 4 minutes and 8 seconds.  There’s also Rock ‘n’ Roll Cymbal From the Seventies that captures the mindset of collectors everywhere.  And I have to give a shout out to my wife’s new favorite song, Stop Driving Like An Asshole: “you’re an accident waiting to happen/a flipped over SUV/on the 405 at 6 o’clock/your carcass on TV”. 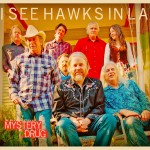 In the latter category is Yesterday’s Coffee, a bittersweet melody about getting to the point where you just hope “good enough” will bring her back.  If You Remind Me is a love story that starts with kids on a bike and goes a lifetime to the point when love and friendship is indistinguishable.  The opening cut, Oklahoma’s Going Dry isn’t a love song in the traditional sense, but rather one of our ancestors loving what we’ve now destroyed.

The Hawks are an L.A. country rock band, in an era that doesn’t have many of those left.  You can argue country rock started in the 70′s with the hippies in the canyons west of Los Angeles high on nature and homegrown weed.  Today it’s more aligned with a struggling middle class in the eastern suburbs where meth is the cheapest option.  But we’re an irrepressible lot and we take our victories where we find them.  I See Hawks In L.A. seem to know that, and with their harmonies and story-telling it’s easy to listen to a few of the tunes on Mystery Drug and find yourself with a nice little high.