It’s late June, the longest day of the year has passed, and the Hawks are laying low. We’ve played almost every night, Phoenix to Richmond in 21 days, and didn’t escape 100 degree + weather till the last week of the tour, but then the humidity stepped in. We’re lounging with the wives and families, resting up for Tour round II. The Hawks reunite on Saturday night in the Southland, our maiden voyage at the brand new Safari Sam’s in East Hollywood, and we’re curious. West on Los Feliz, south on Western, oops, east on Sunset, just past the mega-99 Cent store and into the parking lot, park at the giant Tiki face and load in.

Safari’s Sam’s just might be the best club in L.A. It’s big but not too big, dark with many dark corners, funky but with good sound and lights. Steve Zepeda is a long time booker and a musician’s friend (not to be confused with the Guitar Center magazine, which local wit Doten has rechristened “Musician’s Acquaintance”). He knows how to treat bands and thus has a great lineup on the calendar.We’re opening for Dave Alvin, who has kindly requested us, and his gear is set up, soundchecked, and ready to go. We do our humble opening band tribute to a sound check and head for the beers, hanging with Drac in the back, as the public pours in. The sun is still setting. Ah, summer.

If time on the road teaches you anything, it is to ignore hideous onstage sound and keep playing. Don’t whine, don’t grimace, even if the monitor is feeding you ear splitting midrange sludge. Which greeted our first song, but we plowed through, and the packed house was perhaps none the wiser. Soundman got it together, and we got a great reception from the roots rock audience, packed with vets of L.A.’s first golden age of clubbery, the late 70s/early 80s when X, The Blasters, Plugs, Los Lobos, and many semi-forgotten but great bands played Wongs east and West, the Hong Kong, Cathay de Grande, Blackies. Young people went to Flip and Aardvark and bought thrift store suits and jackets and 50’s dresses and packed the clubs. If hippiedom was dead, this wasn’t such a bad alternative. And these folks are still rocking, with an infusion of youngsters in the crowd.

Rick Shea (whose name means “hawklike” in Irish) added his soulful pedal steel and then guitar to the Hawks set. It gets hot in Safari Sam’s, hot and dark like Austin or Memphis, and that’s a good thing. A great L.A. welcome home. 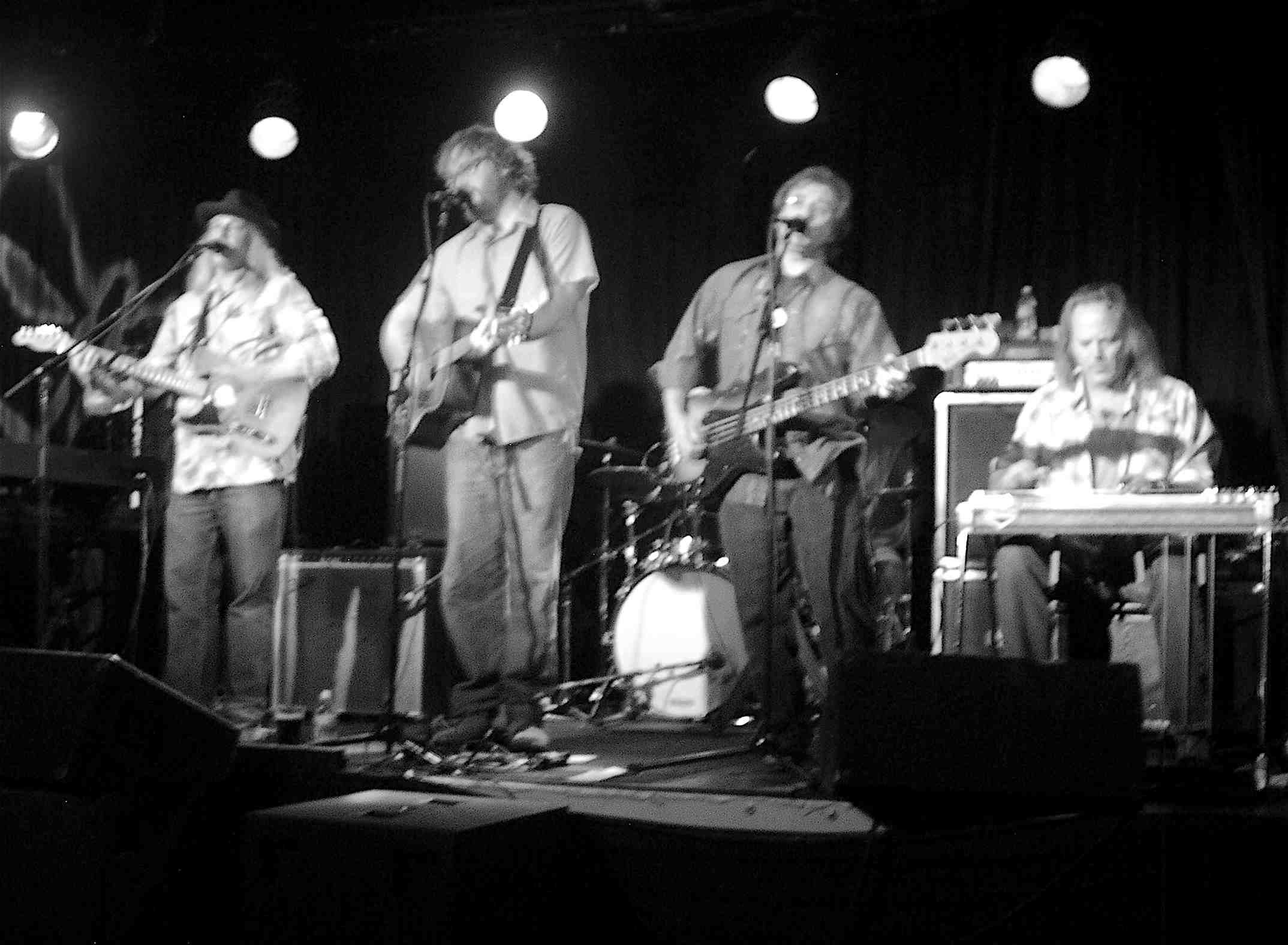 Dave Alvin and his mature Guilty Men hit the stage and played with fire. It’s Dave’s record release party for his brand new West of the West album. The crowd was borderline worshipful for such a hardnosed bunch, and Dave’s lead guitar was stinging and on the money. The Hawks mingled with old and new friends. A shoutout to our publicist Susan Clary, in attendance with her artiste husband Hudson Marquez, the guy who buried the Cadillacs in the middle of the Texas prairie and called it Cadillac Ranch. In America money buys you not only justice, but press coverage, and Susan has been kind enough to help us out at her Second Tier Country Rock rate, because she loves music and odes to altered consciousness.More greetings inside and out Sam’s, to the Coles family (rumor has it Coles is no more more! Alas! Alas!), Jeff from Santa Barbara, Chris Morris, Randall and his rocker mom Evelyn (“I know this sounds ridiculous, but have you seen my mom?”), as Dave and Men cranked out the hits of bygone California, including the best of the night, Dave’s own “Fourth of July.” Get yourself a copy before the weekend.

After staying out way too late, next morning Hawks Paul, Paul, and Rob gathered at a coffee house at Wilshire and Hauser, greeted by Chris Morris, pillar of L.A. rock criticism, who’s also the salvation of Indie 103.1’s Watusi Rodeo, taking over the show with wit, encyclopedic knowledge, taste*, and enthusiasm. Chris escorted us upstairs and led us through a charged up interview, despite having half the sleep we got (last night he taxiied over to Cinema Bar to catch Randy Weeks and get his dose of Tony Gilkyson guitar–FYI, it’s a $40 dollar ride). We played “Raised By Hippies,” “Grapevine,” and something else and were told it sounded great. We’re still waking up from that one.

For more on the Alvin/Hawks show check out what these fine publications have to say:Daily Variety