Hard times may be here again, as the song says, but some things assert themselves when you can no longer buy your way to happiness–friends and music, for example. Us Hawks are rich indeed. 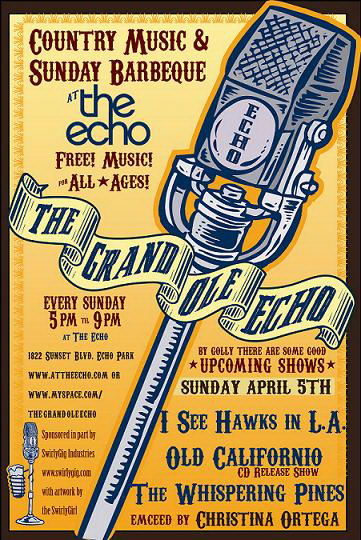 Sunday afternoon kicked off the Grand Old Echo ’09 in style, with the outdoor patio and the indoor Echo more packed than we’ve ever seen it. Good vibes and rich musical textures filled the room from the getgo, as Whispering Pines played elegant and ethereal Allman Brothers influenced country rock, with our favorite outmoded device: sweet twin guitar lines. Nice.

The room got even more packed as Old Californio, launching their great new CD Westering Again, hit the stage. With new guitar virtuoso Woody Aplanalp blazing, Old Californio hit a new level–more muscular and focused, with their 60’s psychedelic layer intact. And great songs. The crowd freaked. Paul L of the Hawks was pleased to sit in on steel for the OC encores, at the same time wondering how the Hawks were going to follow this assault.It was our first full on electric show in a while, but we locked in pretty quickly, and our brand new Burritos 1973 style song “Dear Flash” felt great, like a new old friend. Likewise “Laissez Les Bon Temps Roulet,” which was first written as a cajun rocker, but we’ve been playing it slow and spacious, for the bittersweet verses that reflect on a battered life fully lived. The memory of Duane Jarvis was informing this evening, and although we didn’t know him well, we hope he was digging it all.

So many friends out there on the floor! Hot, steamy, dense, an embracing energy we love. Our friend Randall’s mom Evelyn fainted, the paramedics were called, and she was walked out to an ambulance, where the paramedics tried to convince her to come to the hospital. “No way!” she said. “I’ve got to see the Hawks!” And onstage friends too–Christina Ortega, Queen of the Bluegrass Murder Ballad and emcee for the night, got up with us and totally rocked on “Moundsville Pen.” Message to Christina: first of all, it’s not fair that you can take six months off, get up and own the stage like you’ve been on tour for six months. And second of all, the public wants more. Rich and Levi from Old Californio, on guitar and sweet organ, jumped up and added their good taste to “Motorcycle Mama,” with a satisfying guitar wankoff, er, tradeoff to bring the song home. We did a pretty ferocious “Humboldt” for an encore, and that was it. A long hang with family and friends, with the young Waller redheads and cousin Francis commanding a great deal of attention, big thanks to Kim and Pam, fare well to our Californio brethren, then the Echo security began their customary clearing out for the mysterious young pop bands that mysteriously take over the Echo after the country rock fest. It always seems strange that a packed out and beer and whiskey loving crowd gets festus interruptus every Sunday, but then Los Angeles is a strange, strange place. But good. On this warm April nice it was very good. 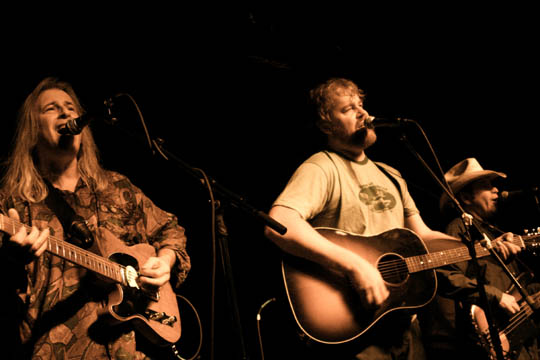