Greetings, Readers of Our Blog. It’s been a bit slow of late, and there are no government conspiracies for us to unravel for the moment, so we’ve been neglecting you, dear Readers. L.A. got its first rain since, when, February? We were walking in Pasadena and a two year old looked up at the strange drops falling from the gray sky.

We’ve finished our CD, Shoulda Been Gold, which will be out on the American Beat label in late January. And Earthworm Ensemble, a children’s CD spearheaded by our drummer Shawn and his wife Sherri, is also at the manufacturer’s, coming out on our own Western Seeds Records label next year. We’ve been sitting at computers, looking at artwork, sitting stupefied at mastering sessions, having meetings. We had the privilege of using Joe Gastwirt on the new Hawks CD. Besides every Grateful Dead record, Joe has mastered The Ramones, Talking Heads, and Henry Mancini. Not exactly a lightweight, as Walter Sobchak put it. Rob hung at the mastering session and reports that Joe is supercool, the kind of analog icon you want young people to meet, his studio packed with esoteric gear with large knobs and few readouts. We emerged from our darkened rooms for an action packed weekend that started Friday night in Alhambra. Our friend Damon, who managed Carlos Guitarlos for years until he realized CG is manager-proof, booked us for St. Therese’s parish fall carnival. St. Therese’s has the requisite Catholic school blacktop surface for its playground (perhaps Christ’s desert roots made him unfamiliar with grass?), and tonight it was packed with carny rides, meat heavy food stands, and lots of screaming kids and their parents. And priests in medieval cowls. Kinda Jedi-like, padres, but go with what you like. It’s all good.

The Goin South Band, with Paul L on dobro and jawharp, Rick Shea on guitar, and John Zeretzke on fiddle, hit the tented stage after a cheerleading demonstration, and Paul M and Shawn from the Hawks drove the normally acoustic group hard, a cool blend of folky and rock. John Z and Rick stayed on stage and formed a Hawks supergroup, two hours of long psychedelic fiddle jamouts and folkier than usual Hawks tunes. The whole thing was an L.A. roots tribe event the Hawks are always eager to put together. Big thanks, Rick and John. On Saturday we hit the freeways eastward again for our high desert home, Pappy & Harriets in Pioneertown. The hot afternoon was mellowing out as we hit the long grade up the 62 into the desert mountains, and the air was positively magic as night fell, Orion and the Seven Sisters gazing down upon us. The Shadow Mountain Band was doing their solid bluegrass old timey thing and the place was packed. It was long longtime waitress Abby’s last night and there were dozens of lasses wearing Abby’s trademark old fashioned dresses and Minnie Pearl hats. The Hawks backed up opener Susan James, newest member of our tribe. The Hawks are the studio band on Susan’s upcoming CD, and her husband Fulton Dingley mixed the new songs for Shoulda Been Gold. Rob stepped up for a sexy duet with Susan, the 70’s CB phase shifter classic The Bull And The Beaver.

We were a tough act to follow, but follow we did, and it was one of the best Hawks shows of the year, achieving liftoff with Wonder Valley Fight Song, and our new 60’s flashback ballad Dear Flash. Jesika Von Rabbit (von Gram Rabbit) joined us on Tonight The Bottle Let Me Down and we rocked on late into the evening. Rob W is in the grip of a minor fugue brought on by 1) Obama’s receiving the Nobel Prize and 2) Obama not having the class to turn it down (because he hasn’t done anything to deserve it). It was vintage Waller on the wee hour tables behind Pappy & Harriets as the bikers and pickup truckers listened for a moment then chugged off into the night, and we all joined the rant, collectively charting a new course for America. A Brand New Direction. Stay tuned, Americans. Coming soon. A Brand New Direction. For America. It’s going to happen. Brand New. We trudged through the sands 100 yards south to our cozy rooms at the Pioneertown Motel, chugged last beers with a couple staying at the motel and crashed out. Susan and Fulton own the elegant yet funky joint, 20 rooms in two long bunkhouse style wood buildings, and it’s a special bonus to get rooms there. Next morning Susan dragged out a big propane grill and the Nourses, Wallers, Victoria and Paul, Susan, and her cool friends put together a big old American breakfast. Most of the Hawks motored westward home, but Victoria and Paul went up with Susan and her daughter into the hills north of Pioneertown, to visit land that Susan’s friends Ryan and Judith had bought, down miles of dirt roads and backed up against BLM land, never to be despoiled. Ryan and Judith are very creative types, and their son and Susan’s daughter are drawn to rock climbing like mountain goats. We did a magical trek into rockpiles as spiritualized as Joshua Tree Monument, with sky islands of gnarled pinon pine, and was that a bristlecone pine on one rock? We drove back into a particularly ominous red L.A. basin sky, satisfied and ready for whatever comes our way.

P.S. our one regret is missing Mary-Austin Klein’s new paintings at True World Gallery in Joshua Tree http://www.trueworldgallery.com . Catch it before it closes! 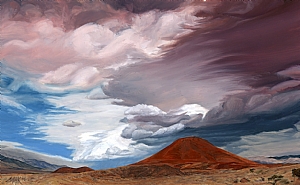