Bo Diddley has passed on. Another giant enters the great unknown.

I was fortunate to get to play and record with the man in the mid-1980’s, as part of The Bonedaddys. Arguably the first World Beat band in the U.S., The Bonedaddys fearlessly mixed African, funk, New Orleans, hillbilly, Cajun, and Zydeco rhythms and original songs. We got to open for a dazzling variety of international and American roots legends, and became road buddies with Burning Spear and The Neville Brothers, among others. We got a lot of schooling out there. 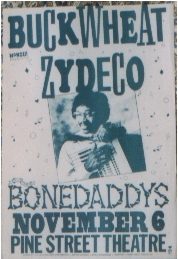 Our lead singer King Cotton introduced Bo Diddley to the Bonedaddys, and we played several packed out shows together in Phoenix and L.A., at the late great Palomino and the Music Machine, and on the Joan Rivers Show. At our first and only rehearsal, Bo’s road manager, a towering man in a suit that no doubt few said no to, stopped me and Phil Gough, the other guitar player, in mid-song. “Bo don’t play that no more.” He was referring to the famous Bo Diddley beat.

What were we to do? It soon didn’t matter, as the rehearsal consisted of very brief run throughs of the hits, and then a long jam.In concert, it was one long improvisation, kicked off by a guitar line from Bo, and we’d fall in behind him–not just hard driving beats, but often spacey, dreamlike wanderings that had the audience and the band transfixed. Bo was clearly an artist, stretching his own boundaries, with no interest in looking back. When we played the hits, we did indeed sneak in the signature clave on guitar. It seemed cool. The scary manager was pleased with the wild crowd reaction and spared our lives. Us Bonedaddys were in hog heaven.

We wrote and recorded a song with Bo, called “Say, Bo” that’s finally come out 20 years later, about the long river from Ghana rhythms to American funk.Several of us went into the studio with Bo to record tracks for the movie “Tapeheads,” which is hopefully in the vinyl bins at Amoeba Records. Bo showed us the features of his latest trademark square guitar, which was loaded with internal electronics, including a phase shifter, and weighed a ton. Between takes Bo was sketching constantly in his pad. We recorded Bo’s “Surfer’s Love Chant,” and some other tracks. Bo nodded at me to play the fills and solos. Me? Are you sure? Well, okay.

Bo signed my metronome. He didn’t need one. He was one. — Paul L
p.s. this was just posted on YouTube, Bo & Bonedaddys on the Late Show, 1987. I was on the road with my polka band Rotondi, watched it from a hotel room in Buffalo, that’s the great Larry Knight subbing for me, check out young and pompadoured Juke Logan on the harp:
http://www.youtube.com/watch?v

Previous post: Robins Weep: The Music of I See Hawks in L.A. (Counterpunch)