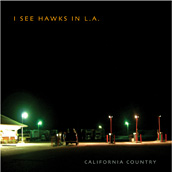 He picked up a guitar
He was just about to play
When someone came up to him and
That someone said “Hey,
You’re Slash from Guns N Roses”

Then a bright light split the heavens
o’er the Cinerama Dome
Did Al Qaeda did that nuke in?
Or was it Jesus coming home?

I am a child of the Golden State, grew up in the orchards and fields
Seen farm towns become commuter alleys
Seen shopping malls eat up the trees
Sometimes I wish for a simpler time
When you could drink right out of the stream
The loneliness around me
freeways just surround me
I’m thirty miles from a field of green

My dad moved us to Victorville in June of ’82
All summer long I traversed the Mojave, went swimming in the river water pool
On a beautiful farm sloping down to the river, September I was back in school
The bulldozers stripped the topsoil
Little flags marked the mile
I never crossed that river again

BRIDGE:
Here I land with no plan
And only now I understand
that I could never leave this land
I’m a California man

Well the radio announced the annual meteor shower starting late tonight
so we drove up to 2 to the Angeles Crest to get out of the city light
the traffic jam started down in Glendale
lit the mountains bright as day
we turned the car the other way
headed back to L.A.
disappeared into the streets

I feel in love with a golden girl
A wild, young beauty with golden curls
But a streak in our hearts ran a deathly black
I took her to Whitewater
But she won’t be coming back

But he was standing in the shadows as we headed for the door
He lowered his rifle and settled the score
My brother collapsed when the round hit his chest
I carried him to the car and I laid him down to rest
Oh brother farewell, for he loved you the best

I hit the gas and she giggled a bit
said looks like now it’s just a two way split
raised up my pistol told her to get quiet
she didn’t listen, I felt myself fire it

Then things were silent except for one sound
of a cold soul leaving the golden ground
I took her still body out of the Caprice
Carried her off into the tall pine trees
I set her sit in a chair of spoiled stones
No cushion for her flesh, no frame for her bones
And I asked God to put us both on trial
Sat at her feet and I waited a while
Then the sky opened up and the rain did fall
And I buried her body by the waterfall

As a young man in Congress he studied law at night
For ten long years, he burned a different light
Presented with his J.D. by John Fitzgerald Kennedy
just before the young president was escorted into history

Fifty years in Washington just passed before his eyes
The building of the empire, its burdens and delights
Did the suffering of the world or the folly of the day
Change a stubborn old heart to see a better way?

And when a reckless new President came calling for war
Old Bird from West Virginia
Sang out the score:

“The doctrine of pre-emption is radical and deadly”

Three shows in Idaho got money to burn
Cash in my pocket, I’ll never learn
My old lady’s got to pay the rent
I got $700 and 57 cents

We got 36 hours to get to Grand Junction
The St. Regis Hotel for a 6 night function
Looks like we gotta slice a corner off Nevada
Hit the tables, think we oughta

Had a crazy conversation with lady luck
Before the boys pulled me back in the truck
Was $1200 up, now I’m sitting $800 down
I owe a hundred to the drummer that’ll never be found

Breakdown, breakdown,
breakdown on a desert highway
Breakdown, in Provo town
my band’s going their way and I’m going my way

I’m gonna climb the red mountain
wade the alkali sea
till the far away lights are shinning down on me
I’m gonna lay my last $20 on the 30 and 10
do a mind bend while they give the croupier a spin
I’m gonna take my little stake to the black jack line
double down on Sevens blow the dealer’s mind
and you can hit me, hit me, hit me again
because I thought I was a looser but I’m build up the chips

So I’m headed to Hawaii
where no one can surprise me
if you want to find me
sing oh, ma liki nigh yee
Molokai, Molokai, Ukulele, Ukulele, Kona Kai, Look a Lady low

Exchanged insults, traded blows
and the wounds don’t even show
you’re self-reliant, a perfect tyrant
I guess I always knew you’d never be my fire-hydrant

The CIA has bugged the door
Close the blinds, Katie bar the door
I’m locked and I’m loaded waiting for ’em to storm in

There’s no ink in my printer
It’ll be a long, long winter
but flowers only bloom if the spring is coming soon

Some say “Bring It On!”
Some reach for the bong
Others say they saw it coming all along

Some say “Bring It On!”
Some reach for the bong
Others say they saw it coming all along

The common man has an unusual plan for psycostomy
write a song get behind the bong it’s a philosophy
now say a prayer for the man who can only
lift the weight of a stoney, stoney, stoney
Now here’s a reference to the Mountain Pony
Mounatain Pony!

Well I believed that one day the revolution would come
All the poor folks would rise up and finally get some
But Justice is for the rich man and Jesus is for the rest
So soon,
I’m gonna take my rest X 2