LIVE FROM THE HAYRIDE:

Live at the Grand Old Echo with the Chapin Sisters:

Exeunt Pub by Paul L and Rob, The Beehive Pub in Swindon, England, from our super fun 2006 summer tour with Tony Gilkyson and Kip Boardman

I SEE HAWKS SELL OUT FOR BEER

A few weeks ago, I See Hawks in L.A. filmed their first beer commercial. In a strange twist of fate, the band signed on to appear in a San Miguel Beer commercial for the Spanish market. Cast as a burnt-out cowboy band, the Hawks play for a roomfull of bored line dancers. Then the beer arrives, the Spanish disco music kicks in, everyone chants “Hey!” and goes crazy. Rob fires two pistols in the air and whispers ‘Paquito’ to Brantley for no known reason. Yes, these are strange times we’re living in. 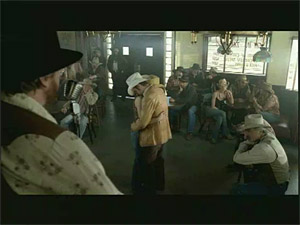 See this commercialThe video uses Quicktime. If you experice any problems, make sure you have the Quicktime plug-in from Apple.com/quicktime.