“Live And Never Learn” is one of those wonderful records that reveals itself in different ways with each passing listen.

They have been famed, over the 17 years that they’ve been releasing albums – their debut came out on September 11th 2001 – for their lamentations on the natural world. So it perhaps doesn’t come as much of a shock that Southern California’s I See Hawks In LA usher in their first album in five years with “Song For The Trees”.  But for all the talk of “the Acacias, the honeybees” and whichever species of tree they mention elsewhere, this is a song for the people of the world.

Perhaps because they have been through so much in the last few years since their last album – 2013’s “Mystery Drug” (a couple of the band have lost their parents) this is a more personal record than before.

Viewed through this prism, everything else makes sense. “Good intentions, are well and good,” sings Rob Waller on the title track, “but they won’t get you out of the neighbourhood” and it’s almost as IF those traumatic experiences have led them to reflect on their existence – I can certainly recall that when I lost my mum, everything else but that seemed to need thinking about.

Waller and Paul Jacques harmonise wonderfully on the absolute knockout “White Cross” (written with Good Intentions’ Peter Davies), with the deep, rich tones coming straight out of Muscle Shoals, while their apparent desire to play with the formula sees “Stoned With Melissa” – and I See Hawks have always liked an anthem to weed – switch from rock n roll to something more psychedelic, but the twist it takes at the end is most unexpected (and to be fair, I am always going to love a record that has the phrase “sitting in Melissa’s basement with a black and white TV, watching Trading Places, she hates Eddie Murphy” at its heart.

“Poour Me” (sic) is a classic country strum, and an ode to getting roaring drunk – at least ostensibly, but then you need to remember that these boys and lady are a little too subtle for that. There is more of that feel on “Planet Earth”, which is elevated above the norm by some absolutely stunning Lap Steel playing.

Perhaps the best example of their ability to look at things in a way that no one else would is “The Last Man In Tujunga”, it has all the devil may care ebullience of Chuck Berry, but it concerns the fires that saw bass player Paul Marshall almost lose his home (and it has a little Stones homage too). This left-field thinking, though, is natural, not forced, and when they are looking at graves at the start of “Singing In The Wind” it all makes perfect sense.

Drummer Victoria Jacobs narrates her own story on “My Parka Saved Me” and it almost has an air of “The Leader Of The Pack” as she does, while members of Old Californio appear on “King Of The Rosemead Boogie” which rocks and pulses along with a rare urgency.

“Tearing Me In Two” with its Celtic touches is another highlight, as are Jacobs’ vocals on the 60s, West Coast infused “Spinning” that follows in the spirit of The Byrds and their ilk and seems to be floating along. And the fiddle work of Dave Markowitz is quite brilliant on the equally blissful – but in an entirely different way – “The Isolation Mountains”.

“Stop Me” ends the record on a warm, airy note. Its widescreen sounds seem to suggest that anything is possible, and such is the ambition on this album that you couldn’t disagree with the premise.

“Live And Never Learn” is one of those wonderful records that reveals itself in different ways with each passing listen. I could review it tomorrow and hear different things – that’s just how it is made. It is these textures, though, these different strands, that make it so special.

I See Hawks In L.A. are the longtime local masters of Flatlanders-style cosmic country rock—well, it’s more a state of mind than a style, isn’t it? Anyway: Hawks have been a band in L.A. for 17 years and every time they think they’ve seen it all, something else decides to happen. Their new Live and Never Learn album is their first release since 2013, and comes inspired by (or inspired despite, or inspired because of) natural disaster and personal tragedy, a potent tradition that goes all the way back to murder ballads and disaster songs. But founding Hawks Rob Waller and Paul Lacques—interviewing with aplomb here—are still flying, and now they’ve added bassist Paul Marshall, whose credits go all the way back to the Beyond The Valley Of The Dollssoundtrack, and drummer Victoria Jacobs, whose credits go all the way back to L.A.’s Ms. 45 and Roger Corman soundtracks. Live and Never Learn is out June 29, and “The Isolation Mountains” is a characteristically Hawks-ian meditation on the now and the next, says Lacques: “[It’s] an acoustic waltz continuing the Celtic vein, a rural California vision of the afterlife with Galway-style fiddle by Dave Markowitz. There’s an ultimate isolation that pulls at us all but that only helps us more fully savor the moments of true connection with those we love.” I See Hawks in L.A. plays Sun., June 10, at McCabe’swith Tony Gilkyson, and on Fri., July 13, at Cal Plaza downtown with a special set of protest songs—more info at the band’s site here! 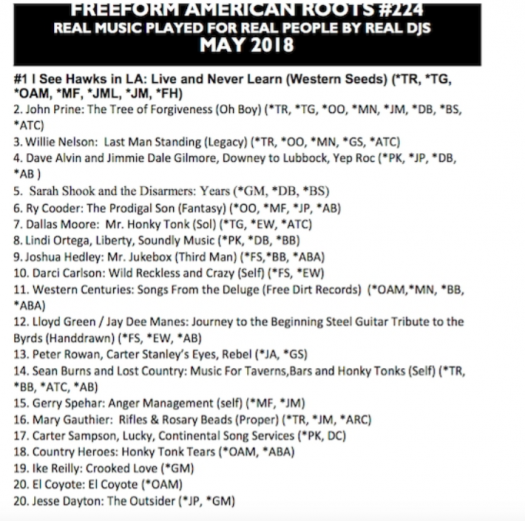 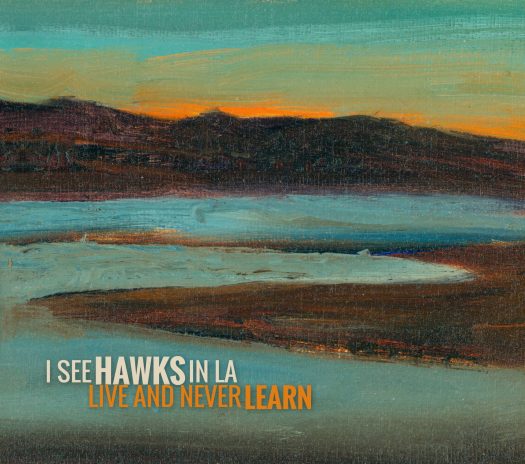 First effort since 2013 due in stores and digital outlets June 29, as band members cling to music and one another to overcome family loss, wildfires, and other travails.

LOS ANGELES, Calif.  — I See Hawks in L.A. soared relatively trouble free for the first decade of their existence, but in 2018 they’re emerging from a string of confrontations with mortality, life choices, and the slow leakage of youthful possibility.  It’s been almost 17 years since the release of their eponymous debut — on September 11, 2001. They didn’t get rich, they didn’t get famous, and yet they’re still here, perhaps benefitting artistically from the rocky passage. The rich flavor of battered soul. It’s clear these Hawks are in it for the music, for each other, and for the adventure of it all.

Live and Never Learn is the first new Hawks album since 2013’s Mystery Drug. It’s been five hard years. In March of 2015, member Rob Waller lost his mother suddenly to pancreatic cancer, and Paul Lacques lost both his parents this past year. Most of the songs on Live and Never Learn were written and recorded while they were dealing with these primal griefs, as well as other personal battles dire but with better outcomes. From the Hawks to those who have lost parents: “Now we understand.”

Loving families, good friends, and making music helped get the band through those times, personally and artistically. The Waller/Lacques songwriting is augmented here with contributions from Hawks bassist Paul Marshall and drummer Victoria Jacobs. One song, the rocking “King of the Rosemead Boogie,” features twisted lyrical and spiritual contributions by members of Old Californio.

Two songs, “White Cross” and “Singing in the Wind,” were co-written via email with Peter Davies of the U.K.’s Good Intentions, and feature the Hawks’ signature electric sounds of reverby Telecaster, thumping Fender bass, and tight harmonies, while the lyrics take listeners from the backstreets of Memphis to the windswept moors of Northern Ireland.

“Last Man in Tujunga” brings us back home to the more familiar geography of smoky Southern California hills. The song, written by the Hawks some years back, tells the story of a breakup unfolding over a cell phone call as the flames get closer. Its appearance here is all the more appropriate and timely, as Marshall was forced to evacuate his Tujunga home twice in the fall of 2017. He was “almost out of minutes” as the “flames were licking at the gates.”

Many of the tracks on Live and Never Learn directly address the band’s personal struggles. “Poour Me” explores the dead-serious theme of a drunk’s self-pity but it’s wrapped up in a light-hearted and humorous approach familiar to any Hawks fan. Dave Zirbel adds classic country pedal steel for this regretful farewell to drinking, as Waller calls out, “I guess I better not have no more.” Zirbel hit the emotional core of many songs on this record, subtle and surprising as always.

Drummer Victoria Jacobs, also an accomplished songwriter, contributes a wistful meditation on the passing of time with her psychedelic folk masterpiece “Spinning.” Night worries and fantastical images illuminate this hauntingly beautiful tune. Jacobs also narrates another touching fable in “My Parka Saved Me,” recounting her real life head-on collision as a teenager on a winter afternoon by Lake Michigan. The Hawks’ doo-wop vocals, ’50s chords, and Danny McGough’s sweet B3 give the terrifying tale a soft landing.

Some classic Hawks themes also appear on this album. “Planet Earth” and “Ballad for the Trees” reflect the band’s longtime interest in ecology and conservation. “Stoned With Melissa” appears to be another Hawks weed anthem, but with a sad and realistic twist. “King of the Rosemead Boogie” introduces an imagined hero of the San Gabriel Valley in all her (his?) glory.  Regret and earth/spirit duality return in “Isolation Mountains” and “Tearing Me in Two,” both brought to fruition by the deep fiddle of longtime collaborator Dave Markowitz, and broke-the-mold accordionist Richie Lawrence.

This spring, good news has returned for the Hawks and their families. The band finished tracking and sent the files off to four-time Grammy-winning mixer Alfonso Rodenas (Los Tigres del Norte), who mixed Mystery Drug as well as several other Lacques-produced projects. The mixes came back sounding great, and the Hawks felt a surge of optimism, perhaps irrational, perhaps a crucial tonic to these gloomy times. Now Live and Never Learn is here and the Hawks sound better than ever. With shows in California and the U.K. coming up this summer they’re feeling good and can’t wait to hit the stage and sing, together again, together as always.

Live and Never Learn is available now to fans through a Kickstarter campaign and will be released in stores and all digital outlets on June 29, 2018. 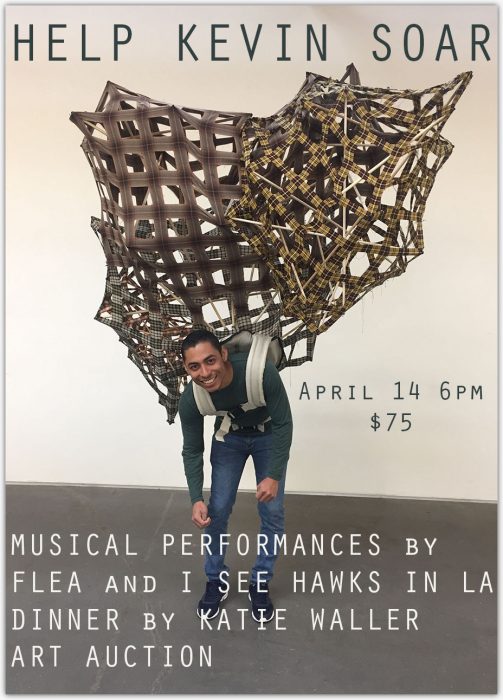 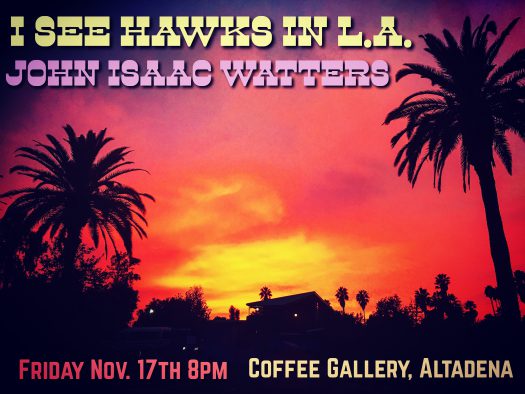 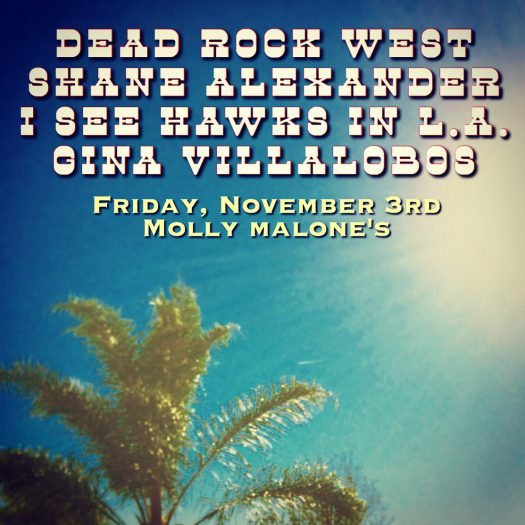 More on the show and the Palms here:

I See Hawks In L.A. to restart the Palms party 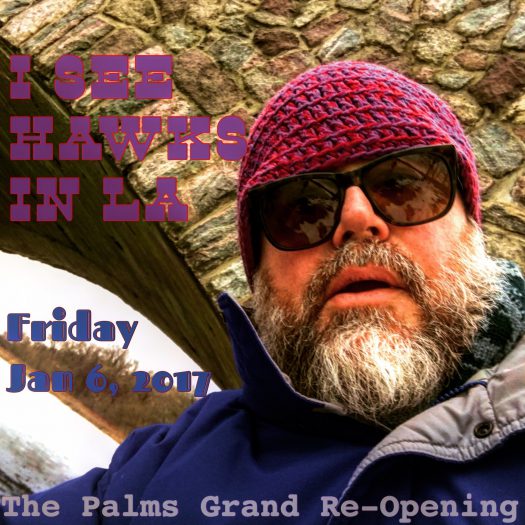